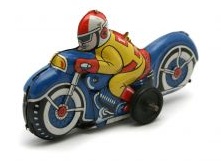 Editor’s Note: Tasty has a way with the rhyming epic—here’s another lyrical tesserac that Yumyum himself describes “a Seussian exercise in cadence.” Read on and enjoy the ballad of Motorcycle Marley. It’s an uplifting story of passion, determination and thoroughly popped wheelies.

Motorcycle Marley started early on his Harley
Quite a burly looking biker, Michael Marley, once the best
At pulling up and popping perfect pop-a-wheelies, pronto
From Toronto, he’s retired now and not at all depressed

His papa, Peter Marley, never sat upon a Harley
Though he rode a unicycle next to Michael as a child
And Peter wasn’t bothered when young Mike would mock him: “Father!
Could you pop a pop-a-wheely, Papa? That’d be pretty wild!”

Now, everybody knows a unicycle (even Michael)
And popping pop-a-wheelies was impossible for Pete
And he would laugh and play along and sometimes sing the Wheely Song
And purchase Mike a Popsicle (a frozen frosty treat)

He found some used-hog catalogues and rolled ten thousand penny-logs
And soon enough young Michael had the bike that he had chosen
And practiced pop-a-wheelies in the parking lot adjacent
To his house while all the locals stood and watched, their faces frozen

For pop-a-wheely poppers need some room for popping wheelies
And Michael couldn’t show his face without there being posses
People pushing sharpies, pens and pencils at his person
Begging Mike to write his name on their 8 x 10 glossies

And late at night he pondered on the current situation
And how it could be remedied to regain wheely-space
And he devised the perfect plan, public humiliation
A pop-a-wheely contest that would be his fall from grace

They made a track, it stretched a mile, it set both back and took a while
And as the tickets sold out fast, word spread from town to town
Not only was Mike Marley popping wheelies for the money
He also put upon the line his Pop-a-Wheely crown

And the day came, the bleachers filled and air ballooned with tension
And Michael smiled and waved and kept the cat inside the sack
And Pop-a-Wheely Popper Paul, polite, quite plump and pimply
He pulled a pop-a-wheely and he tore off down the track

27 seconds past before the crowd screamed out at last
The voice over the PA screamed “6 hundred 50 feet”
And every eye turned back to Mike who sat there, waiting, on his bike
As the announcer screamed out “Okay folks, time for a treat!!”

Now, pop-a-wheely pundits all agree it was impressive
Though Motorcyle Mike could pop six-fifty in a pinch
He blew a kiss up to the stars and pulled up on his handlebars
And roared away, and let’s just say he went about an inch

And as his front wheel hit the ground the crowd let out a groaning sound
And Motorcycle Marley shrugged and turned off the ignition
And Pop-a-Wheely Popper Paul, perplexed, he posed for pictures
The cover shots for Pop-a-Wheely Weekly’s next edition

And as time passed the public soon forgot that strange debacle
And Michael Marley’s legend faded as less people told it
And now on secret backroads with nary one camera flashing
He pops six-fifty with a smile, one-handed and blindfolded.

Motorcycle Marley started early on his Harley
Quite a burly looking biker, Michael Marley, once the best
At pulling up and popping perfect pop-a-wheelies, pronto
From Toronto, he’s retired now and not at all depressed.