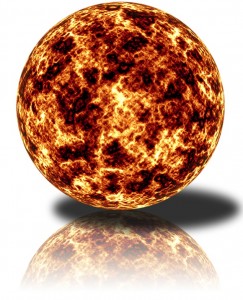 This past weekend I found myself eager to get started, even though NaNoWriMo hadn’t begun. Then I realized it might be a good idea to warm up a little anyway, so I set out to write a short story.

When the concept for Artistic Differences came to me, I knew I had to see it through—but I also knew it was in danger of becoming cheesy and gimmicky. I tried with all my writer’s might to stop this from happening, and I’m fairly sure I succeeded.

It was a good exercise because it alerted me to a habit I need to break during NaNoWriMo: labouring over every piece of prose. Read on and enjoy!

Today was the day to end all days, and I mean that quite literally. What started as a simple squabble ended up swallowing the planet, and my brother too. He is still dead—oh strange sensation!

Yes, I might as well admit it’s true: I burned the temples, just as he said. I started it! I started it! But did I really? He mocked me with mountains, stole our great game—it is too painful to think of, still, even after such disproportionate revenge. And now nothing is his or mine or even its own; someone’s, perhaps, but that’s anyone’s guess. Anyone but my brother, who knows but cannot say, for he is dead. Swallowed. Still.

Share, mother said, share and play nice. This cooling rock is enough canvas for two. We swam and spun in the noxious gases and flung stormy tendrils across hemispheres. We showered in stones and luxuriated on magmatic bidets. We plucked rocky snowballs from the sky and had glorious fights—in fun! In good fun I tell you! Not like the latest, the last, no, but rather as brothers should fight: like children, full of joy. We littered our little rock with cosmic trash and never did the dishes, and life was grand.

We did, of course, have ambition. And plans! Oh, very big plans indeed. Our wild ways were punctuated by bouts of implacable focus, for we were artists then and we are still—I am, still. We sculpted clouds, created life, scooped out oceans and cut vast continental mosaics—and then in fits of vanity we would smash it all to pieces and start anew. Yes, we did it all: all the tropes, the archetypes, the clichés. We were artists, then. We were we, then.

But we had our differences. Artistic ones. And I suppose that’s how it started. I am no minimalist, but I could not abide his opulence. He wanted topography! He wanted jungles! He wanted beasts! Again and again he woke to find I had laid waste to his efforts, and again and again he would concoct some new monstrosity. I could not keep up with him, and in time our world became a gaudy embarrassment of green quilting and mountain filigree, full of fanciful mutants that bled and yawned and farted. It was then that I saw clearly what he was doing: he was building his version of our childhood home. Mother’s home. How tasteless!

His favourites were his bats: huge, clever, leathery things with dinner-plate eyes whose hundred-strong flocks blocked the sun as they passed, raining greasy shit on the treetops. I gave venom to the spiders and dipped the lizards in poison, but the bats grew iron stomachs. I trained armies of insidious parasites to shred their insides and rewire their brains, but the bats saw through all their rouses. Finally I churned about in the potbelly of the planet until it belched fire and soot from every orifice and turned the sky black—but as the forests fell to frostbite and acid rain, and all life dwindled, the bats retreated into mountain caves and coastal caverns, worming their way into the rock to feast on foot-long millipedes and inch-thick moss. I murdered them by the millions with cave-ins and toxic gas, but my brother had built them hardy and canny, and they proliferated despite me.

Then he did an astonishing thing. He let them know him.

What a fool! They would have made their own gods soon enough, and he’d have had divine playthings to go with his meaty ones. But no: he appeared to them in pools of heavy water and shiny veins of iron; he spoke his name to them on howling subterranean winds. No longer content to eat and fuck and drive deeper underground, they took chunks of chalk and ochre and scrawled shapes on the walls. They took fire from volcanic vents to burn their dead, then collected their skulls and hurled them into the deepest chasms. They came together in cheers, then chants, then songs and, soon, symposia. Sick of scavenging, they gathered at his most vivid icons and farmed caverns of bugs and fungi; sick of shivering, they stoked bonfires under mounds of soapstone and made their winter homes in the caves above. Then they bred and bred, and spread and spread, and one day they returned to the surface, and he came to them in person.

Eons had passed, the sky had cleared, and all the world was trees reaching towards sky, unbroken but for oceans and the snowy caps of long-dormant volcanoes. He laced himself into the stars and smiled at them with a face like their own, and bade them flourish in the restored cradle of their race. And I thought: this has gone far enough.

I rose, brilliant, with the sun, and burned out their cavedweller eyes! I left them all blind to flop about in the foliage, squawking and scrabbling at the dirt! I plunged into the deepest caverns and punched holes through to the mantle, flooding his holy cities with my holy fire! A thousand incarnations of his visage fell to flame, and the bats that lingered underground were forced to choose sightless suffering or a coffin of hot rock. Then he faced me, and we spoke for the first time in millennia.

“And where is your work?” he asked.

And we fought. Oh how we fought! Not as children but as gods, as laws, as opposed properties of existence! We took form as titans and wielded entropy like swords, whittling down mountains with misplaced blows and boiling seas with the heat of our gazes. The sad, blind bats could feel us chip away at their world, and they groped for their familiar caves as we grappled in the sky. The sound of their suffering enraged my brother, and as he lunged at me with teeth bared I saw a curious thing in his eyes: pain. True pain. The artist had forgotten himself, and joined his art on the canvas. Pathetic!

I had to free him! I drew a mighty breath and blew away the bubble that encased our little home, and he watched as the trees turned black and the bats went silent and still. He let out a great howl and descended upon me with fury I had never seen, and as we fell to the crust with a seismic crash the whole planet wobbled and came loose, careening towards the sun like the comets of our youth. I struggled out from beneath his weight and dove into the void, but when I turned to look back he was still pummeling the barren rock with indiscriminate rage, and even as the tongue of a solar flare looped around them both and drew them into the golden maw I could see the heave of his shoulders and hear the impact of his fists. Then the sun gave a digestive gurgle, and they were gone.

Now I sit, in the dying light of that sun, and wait. My brother is dead, still! But surely not forever. Surely! Oh strange sensation! I have known permanence in being, but never in loss—so I wait. A new canvas will come—is coming, though it is still but a ring of dust—and when it does I am sure he will return. For he is an artist. We are artists. Still.