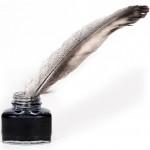 Editor’s Note: Tasty Yumyum recently introduced his new project, Dear Fiend: The Letters of Stoves & Yumyum. We’ve seen the tantalizing Editor’s Note, and now it’s time for the first letter in the collection. Here we meet a naive young Tasty, writing a friendly letter to Halton Stoves with no way of knowing the epic story he was setting in motion.

It is with the most sincere pleasure that I write you this (hopefully) short note. My name is Tasty Yumyum and I am a freelance writer, currently semi-employed by the Stockholm Times, and I have just recently been assigned to read and review your first book, Smelled Like Fish, Tasted Like Cucumbers.

I must, first and foremost, admit that I didn’t truly understand very much of the book, yet I did enjoy it immensely. I quite liked many of the characters (Boobs MacGillicuddy being my absolute favourite) and thought that the first half of the novel showed unmatched potential and promise indeed. Yet, upon your introduction of the talking bedpan/familiar Sassafras, I became confused, almost as much so as your hopeless protagonist, Shel. While not at all a scholar very familiar with the absurdist tradition, I do consider myself to be well-read, and your 34 page dissertation on the Swedish shoehorn industry (delivered, oddly enough, entirely in Pig-Latin) was hard to read and, ultimately completely erroneous. To date, I have never read such inflammatory nonsense so designed to outrage an entire nation in my 19 years on this Earth. To have to first decode such insulting ideas was a slap in the face. Soon, though, I realized that Gertrude the Fishmonger was simply a metaphor, a caricature of modern stereotypes of Swedish culture. Well, I believe this is what I gleaned from the speech on page 1452, when Gertrude finally admits to Boobs that it was her, in fact, who had stolen the alarm clock from Shel, causing the workers to revolt in the first place.

Am I right? Does this make sense? I apologize if I am not making myself clear, English is not my first language and I am doing my best to get my meaning across to someone as obviously gifted with words as you.

Nonetheless, let me get to what my editor often refers to as “the nit and the grit.” I did notice that one week from tomorrow you will be in my hometown of Stockholm for a writer’s convention, doing an autograph session and a speech on the irrelevancy of the comma in modern literature. I was hoping, if it was not too much of an imposition, if we could get together and discuss Smelled Like Fish, Tasted Like Cucumbers over a cup of coffee and a platter of herring. I would very much enjoy hearing you explain some of the things in your novel (I almost wrote epic novel, but I will wait until after you shed some light on a few things in the book before I go so far). I will hold off on my review until further notice from you or your handlers.

Here’s hoping we can meet and slap backs soon. I have sent along a copy of my unedited manuscript Pork, Pork Everywhere. Feel free to read it and make notes. I would love to hear your thoughts.