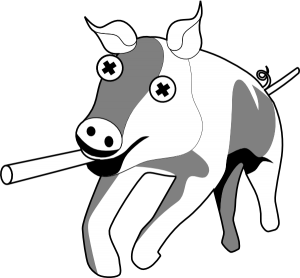 I got an email earlier today from our benevolent dictator of an editor, asking for more copy on this blog to keep giving our readers fresh content. I’m not prepared to put up my next addition to my NaNoWriMo novel yet, but I do have something from my own blog that I’d like to share over here.

This was the first story I ever posted, and it was quickly buried in my backlog where no one ever read it. I always felt it deserved a wider audience. It may be fiction:  I cannot say that this actually happened, but I suspect strongly it did. For a couple of summers I worked in a factory that cooked steel, and I heard this from a co-worker of mine who rarely spoke at great length, and never demonstrated having enough imagination to come up with this out of the blue.

Whatever truth there is to it, I’m sure I have embroidering the tale some, but that is the prerogative of a storyteller. It’s my story now, and I’ll tell it to you just as I would across a table, over a beer, in the back of my local watering hole.

This is the story of a party, a great party, and that party’s ending makes it one for the ages.

My co-worker had a friend who played in a rural adult baseball league. They won the season championship, and it was agreed that they would throw a pig roast to celebrate. One of the players was a farmer whose cornfield grew out towards a beach on the north shore of Lake Erie. He decided to host the party on his land, and the party would be open to all comers. The team, their family, their friends, neighbours, anyone who heard about it was welcome to come. The farm was in the middle of nowhere, and there was going to be copious amounts of alcohol, so as each carload of revelers arrived, their keys were confiscated.

There were pigs set up on spits, and trestle tables lined with booze, and kegs in washtubs full of ice. Hundreds of people showed up to drink and laugh in the sand. Roaring beach fires were set up, and the long summer day saw the team’s triumph celebrated with all the flourish and enthusiasm that small towns across Canada can muster for such an event.

Unfortunately, where there is fire and alcohol and young men, sooner or later, someone is going to start acting like an idiot. One fellow, well into his cups, took to jumping over the glowing red coals of a bonfire. He was probably showing off for a girl, or maybe it was a drunken dare, or perhaps it was just a day for doing what you felt like, but the young man’s recklessness did not end well: He fell into the fire and was badly burned.

An ambulance was called, and, as the farm was more than half an hour from a hospital, a police cruiser came out too. The young man was taken away, and the two police officers put on their sternest faces. They called over the host of the party and said, “Look, people are getting hurt. You’re going to have to shut this party down.”

The farmer looked over his shoulder at the hundreds of inebriated guests on his beach, and then back at the two police officers and their single car. “You shut it down,” he said.

“Yeah, I guess you’re right.” One of the cops said. The vast majority of the crowd was in no fit state to drive, and it would have taken buses to get them all home. The two officers got in their car and drove away, and the party-goers promptly forgot about them.

Afternoon went into evening, and then the wee-hours of a warm August night. The farm house could never accommodate so many people, and most just settled down on blankets in the sand, falling asleep or watching the fires burn down to ashes as they willed. Then around three in a morning, they heard a rumbling.

People awoke from their sleep and lifted their heads to stare inland, seeking the source of the noise. The rumbling grew louder, and then light began to stream down through the rows of the cornfield. Then the rumbling stopped.

Groggily, people got to their feet and stared into the cornfield, wondering what on earth was going on. What was all that light? Then, to their amazement, the tops of the cornfield began whipping back and forth, starting at the road, and moving towards them, inexorably, like a windstorm that struck only a few files at a time, advancing towards the beach.

Then, from out of the corn, emerged a company of soldiers in full riot gear: Shields up, batons at the ready. The rumbling had been the diesel engines of  trucks, and the light was their combined headlights shining the way to a party that the local police had ordered shut down. They had taken the suggestion, ‘You shut it down’ seriously, and as soon as they left the farm, they called up the local militia for a riot control exercise.

By now most everyone was sober enough to drive home, and they left in the early morning, before even the sun had come up. No one begrudged the militia their fun. It had been a great day, followed by a great night, and its conclusion was the least likely ending to a party, ever.

3 thoughts on “The least likely ending to a party, ever.”