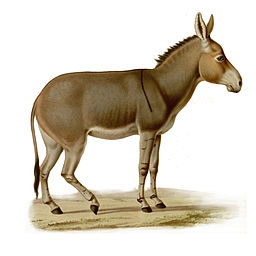 Editor’s Note: You may have noticed I recently added a Verse section to Stranger Than Truth. One of the main reasons for this was to highlight awesome pieces of rhythmic fiction by Tasty Yumyum like this one about a great musical triumph.

I wrote this for a children’s book that my friends and I put together as a present for a newborn.

Spadonkadonk the donkey was a mule like any other
And like most kids Spadonkadonk adored her older brother
‘Cause Honkeytonkadonk was a real wizard on the guitar
Mandolin and violin, accordion and sitar

And everyday Spadonkadonk would closely pay attention
Until one day at dinner when she decided to mention
“Oh Daddadonk, oh Mommadonk, I want to be a drummer
I saved up all my donkey dough allowance since the summer!”

Her brother and her mother and her father all did giggle
And in her seat, uncomfortable, Spadonkadonk did wriggle
Her father said, “Spadonkadonk, music is not just noise
And anyway, they bands you always play? They’re always boys!”

And over time they all forgot the drums that she desired
All except Spadonkadonk who knew what was required
She borrowed pots and borrowed pans and lids to use for cymbals
She made a set of rack toms from a friendly giant’s thimbles.

So everyday, after her chores, Spadonkadonk would sneak
To where she’d hidden her drum kit, a cave beside a creek
She’d hum along and drum along to all the jams by Jerry
And lo and behold she was really good by January.

“Satisfaction”, “Stir it Up”, that one about the levee
She could play it nice and soft or bash about real heavy
One afternoon while she played “Inagoddadavida”
Right into her cave there walked a spotted lady Cheetah.

“They call me Rita Cheetah, I’m the fastest guitar shredder
And you can search for miles around and never find one better.”
She left the cave and came back in but this time with her Fender
She broke into “Eruption” and it was a real mindbender.

So everyday the two would play and all the while improving
Some days swinging, some days slamming, some days funky grooving
And then one morning, without warning, in their secret space
Stood a gangly animal with Traynor amp and bass.

“I’m Sally Sloth and I’m a goth and I heard you girls rocking
And I can melt your face with bass so let’s not waste time talking!”
She grabbed her axe and jumped right in and soon the cave was hopping
With bashing, crashing, smashing, noodling and slappy-popping.

And every day the three would play and every day got tighter
And over time Spadonkadonk turned into quite a writer
Verses, bridges, choruses, turns out she was a ringer
But it was all too obvious the band needed a singer.

But soon one afternoon a loon walked in and started crooning
“I’m Lana Loon and I can sing a song in every tuning!”
First some Halen, then some Journey, then a song by Ella
And all impressed said, “You’re the best! We love your acapella!”

And all agreed they did indeed enjoy what they were hearing
And so the band was forced to relocate into a clearing
And soon the clearing, too, was full with animals all lined up
When Rita found a Battle of the Bands, “Next week, we’re signed up!”

Spadonkadonk was angry and her head was full of worry
“I don’t think that we’re ready yet, I don’t think we should hurry!”
‘Til Rita took her paw and put it ‘round her donkey shoulder
And said “Spadonkadonk, you’re great! Why wait until we’re older?”

“But Honkeytonkadonk, my brother, his band is competing
And they are clearly going to win! I’m begging, girls, I’m pleading!”
But Lana said, “Just clear your head and quit this silly crying
Because I’ve no intention now of quitting without trying!”

Sally laughed, “I do believe we’ll win this competition
And we will show the boys who squawk that we’ve made rock our mission!”
And so they practiced through the week for practice makes perfection
And when the day came, off they went to pass this rock inspection.

All the boys in all the bands they hounded and harassed
They giggled as the judges made the all-girl band play last
And half the bands were pretty good and some were really rocking
But Honkeytonkadonk’s band let the music do the talking.

The rocked it slow, they rolled it fast, they played it soft then loud
The power of their rocking had attracted quite a crowd
And when they finished everyone stood up and they applauded
And then the girls they took the stage with all their stomachs knotted.

The crowd looked on, astonished, at this weird foolish endeavour
Spadonkadonk, she grabbed her sticks and shouted “Now or never!”
Beatles, Marley, Who and Zeppelin, a tasty medley
And from the crowd they heard aloud “So gnarly!” “Wicked!!” “Deadly!”

The judges all deliberated to make their decision
The girls were all delighted they had played with such precision
And then the judge stood up, a legend known as Billy Gibbon
And placed around each girl’s neck was a shiny First Place ribbon.

And Honkeytonkadonk, surprised, walked over to his sister
And said “You played so hot I thought my ears were going to blister.
I’m Sorry that I mocked your rock, I totally just feel dumb.
Let’s go downtown and look around and get your kit a real drum!”

Throughout the land the band was the topic of conversation
And everyone admired their fire and real determination
And those who laughed and pointed? Now they sing a different tune
About a band that rocked, the donkey, cheetah, sloth and loon.